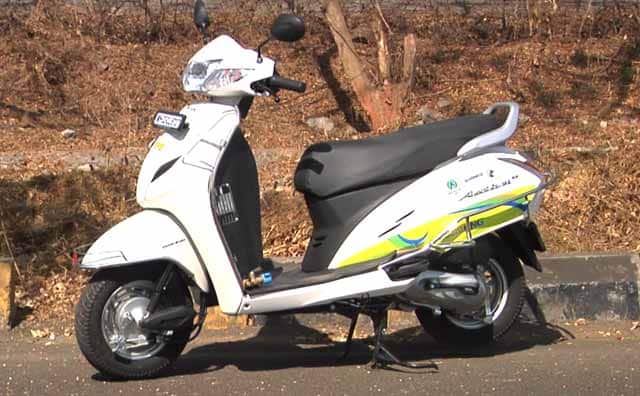 CNG-fuelled two-wheelers for an emission-free India

In recent years, there has been a drastic increase in the sale of two-wheeler vehicles in India, especially in metropolitan cities. The ever-increasing traffic, lack of parking space and the rise in the middle-class population has enhanced the demand for two-wheeler significantly. As per the 2015 Statistics of International Organization of Motor Vehicle Manufacturers (OICA), the domestic motor vehicle sales in India between April 2015 and March 2016 was approximately 20.47 million units, of which two-wheelers were 16.5 million, constituting 80% of the total sales. Although two-wheelers are the most preferred mode of transportation for the daily commute, the air pollution caused by them is a rising concern. Another study by the Centre for Science and Environment (CSE) reveals that two-wheelers account for 31% of vehicular pollution whereas four wheelers constitute 20%.

Due to the alarming increase in air pollution, a sustainable and eco-friendly alternative to fossil fuels has become the need of the hour. Due to the deteriorating air quality in Indian metros, CNG fuelled vehicles are paving the way towards cleaner and reduced emissions. The use of Compressed Natural Gas (CNG) in two-wheelers can be helpful in controlling air pollution. Similar to petrol and diesel, even CNG is a fossil fuel, but it burns much cleaner and has low carbon content. This, in turn, can reduce vehicle emissions by approximately 30%. In addition to these, the engine parts of the vehicles corrode gradually with CNG than with fossil fuels. Moreover, CNG-fuelled vehicles offer a comparatively higher mileage. Owing to all these benefits, CNG-fueled vehicles are a better alternative to vehicles using petrol and diesel.

Apart from environmental benefits, some of the other advantages of CNG powered vehicles that give them an edge over traditional gasoline-powered vehicles are mentioned below:

With an aim to curb the air pollution arising from two-wheelers, the government of India has started a pilot program named “Hawa Badlo”. As a part of this program, two-wheelers like Honda Activa will be fitted with CNG fuel tanks and a feasibility study will be done on their emissions and cost. Once the results are positive the project will be expanded further.

In addition to that, the government of India has launched 10 Honda Activa CNG scooters along with a two-wheeler CNG kit approved by Automotive Research Association of India (ARAI). The Activa that costs INR 65000 /- offers a mileage of 120 km /litre. Its running cost comes around 60-65 paise/km, which is half of petrol.

Although the two-wheelers are yet to be launched for the general public, their promising mileage and cost-effectiveness will certainly make them popular amongst the middle-class population. However, if you happen to purchase a CNG fuelled two-wheeler vehicle, make sure to get it insured. A comprehensive two wheeler insurance provides coverage to your vehicle against theft, loss, and damage. Moreover, having a bike insurance policy is mandatory in India as per the Motor Vehicles Act.

With Finserv Markets, you can purchase your two wheeler insurance online in a hassle-free manner. Additionally, Finserv markets provides wide coverage at lower bike insurance premium. This gives it an edge over other car insurance providers in the market.

Learn How to Diagnose the Needed Repairs in Your Mercedes

Keep your customers closer with the right auto repair management

Making Things Last: Save Money With Proper Repair And Maintenance